Property investors from mainland China are sharpening their focus on Portugal and Singapore as alternative investment locations, while shifting more money out of traditional markets like the US and Australia and Britain amid concerns about fraying trade relations.

While the Covid-19 pandemic has tempered overseas trips, it has not deterred investors from hunting for overseas assets. Enriched by the recent stock market boom, Chinese buyers have sought long-term foreign residencies through passport-for-cash schemes, or diversified their investment basket into less volatile markets.

This year, more mainlanders have rushed into Lisbon and Porto before the Portuguese government removes both cities from its “golden visa” programme in 2021, according to one industry consultant. In Singapore, the Chinese became the top foreign buyers of non-landed homes in Q3 2020, official statistics show.

“Many of the [mainland Chinese] buyers who are active this year are already in their destination markets and are purchasing at a more rapid rate because they intend to stay there,” said Georg Chmiel, executive chairman of property portal Juwai IQI. “Some others are purchasing as part of the golden visa process.”

Chinese investors accounted for US$21.7 billion or 5 per cent of global real estate investment activity from January to September in 2020, according to Real Capital Analytics (RCA), which tracks deals costing more than US$10 million. They contributed US$41.7 billion or 4 per cent of the total in 2019.

The flow of Chinese capital has been swayed by ongoing political tensions between China and some of its biggest trade partners. Relations with the US and Australia are souring due to sanctions and export bans, prompting mainland investors to look at Singapore and elsewhere to park their wealth.

“In recent years there has been a consistent desire from PRC investors to diversify outside China to complement their domestic investments,” said Oliver Watt, a director at Savills’ London-based cross-border investment team. “We see notable pent-up demand.” 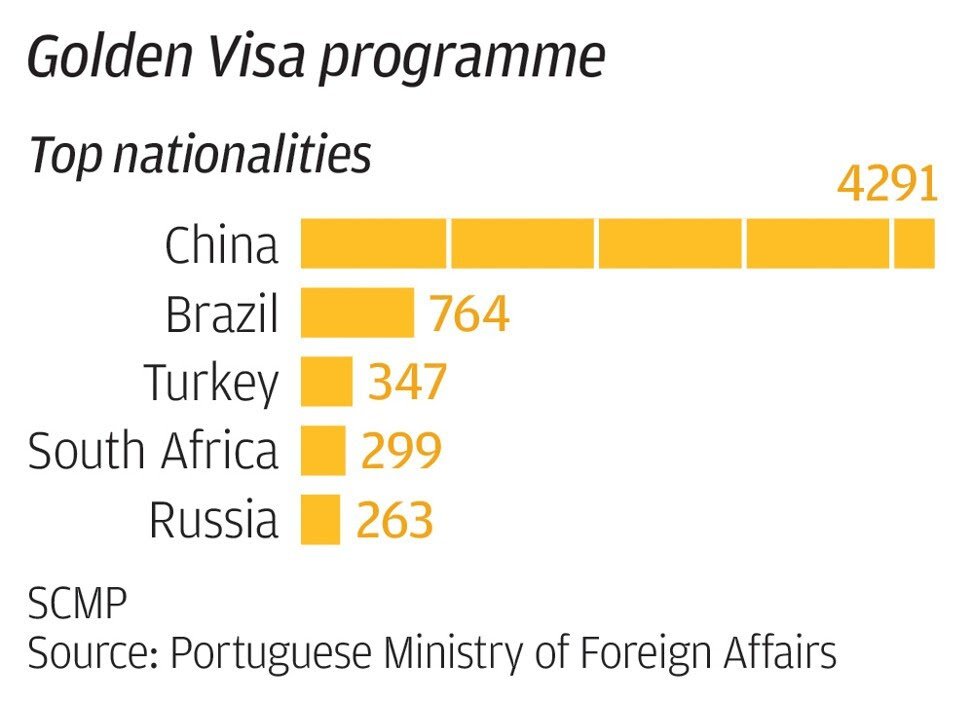 Top applicants in Portugal’s Golden Residence Permit Programme, as of July 2019. The government has since put its ‘golden visa’ plan in ‘update mode’.

Befitting its status as the hottest market in Europe, Portugal was the top destination for Chinese investors as inquiries surged 176 per cent in the first nine months of 2020, according to Juwai IQI. Lisbon and Porto became more popular after the government mulled scrapping both cities from its passport-for-cash scheme beginning next year (2021).

The decision created a “wave of demand for urgent property acquisition from Chinese buyers,” said Luiz Felipe Maia, director of Maia International Properties. The imminent exclusion of both cities has increased the urgency for those who were previously holding back purchases because of the Covid-19 situation, he added.

Portugal’s plan to exclude Lisbon and Porto from golden visa scheme has drawn  flak from the property industry, however.  Chinese investors spent €37 million (US$43.9 million) on Lisbon’s residential market in Q2 2020 alone, Maia said, which is twice their spending in all of 2019.

In Singapore, Chinese buyers represented almost a quarter of the total foreign property purchases in the first three quarters of 2020, according to data from Cushman and Wakefield, a property consultancy.

Last quarter, their purchases of non-landed homes more than doubled to 271 from the previous quarter, according to data compiled by OrangeTee & Tie, based on statistics from the Urban Redevelopment Authority.

“To many Chinese investors, properties in Singapore are highly attractive and many see the merits of staying or investing in Singapore especially given the positive capital appreciation of many properties here,” said Christine Sun, head of research and consultancy at OrangeTee & Tie.

The losers appear to be markets in the US, UK, Australia and Japan, as Chinese investors shunned them to steer clear of unsettling geopolitical risks and the number of Covid-19 cases. Deals involving these four spots have dwindled over the past two years and are likely to remain depressed in the near term, property consultants said.

Chinese buyers paid US$8.1 billion for homes in the US in the 12 months ending March 2020, down from US$9.4 billion and US$21.3 billion in the preceding two years, according to the National Association of Realtors. In Japan, they slumped 98 per cent in the first nine months this year to US$171.3 million, according to RCA, for a deal size of more than US$10 million each.

“China’s economy is doing well, buyers have money and motivation. After being unable to travel or go overseas this year, they have vast pent-up demand,” said Juwai’s Chmiel. “After a year of sitting on the sidelines, there will be many who want to get into the market and travel overseas again.”