Stories
by Carolina Maia
Want to Retire in Portugal? Here’s What to Know, as Americans Move There in Droves 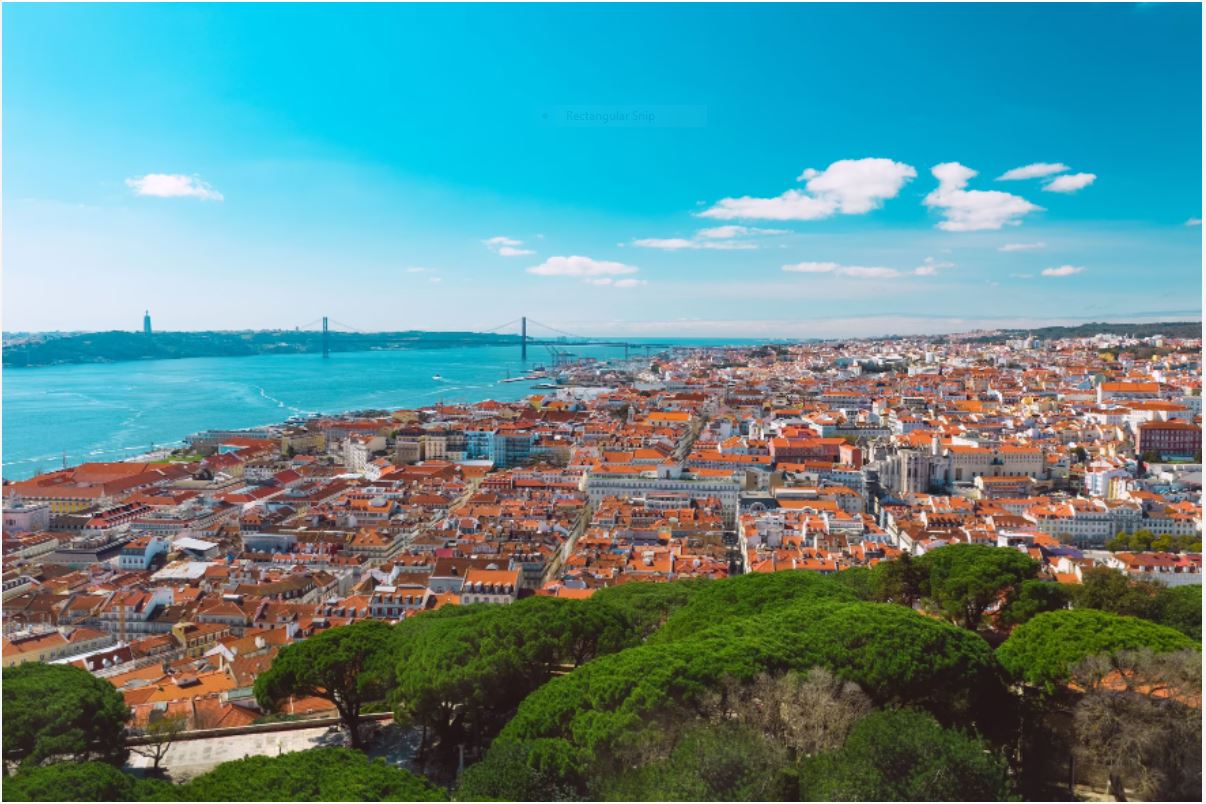 Portugal’s favorable visa program is just one of the attractions for American retirees. A view of Lisbon’s old town and the Tagus River.

Heidi Dezell, 57, worked in sales for education-technology companies for almost two decades before she was laid off from her job in Seattle four years ago.

“I was an older woman and I couldn’t get hired,” she says. “I always wanted to travel the world, write and take photographs. I thought why not take 10 years and go? If I run out of money and I’m not a famous writer, I’ll come back and be a Starbucks barista or a Walmart greeter.”

Ms. Dezell, divorced with two millennial children, rented out her house in Seattle, put her possessions in storage, and traveled to 12 countries in 10 months, including Mongolia and South Korea.

After the pandemic struck, she decided to settle in Europe.

She read that Portugal was the easiest country in Europe to get a resident visa. At the time, Portugal’s popular D7 visa, known as the passive income or retirement visa, was suspended due to Covid. But she got a student visa to study Portuguese at University of Coimbra. 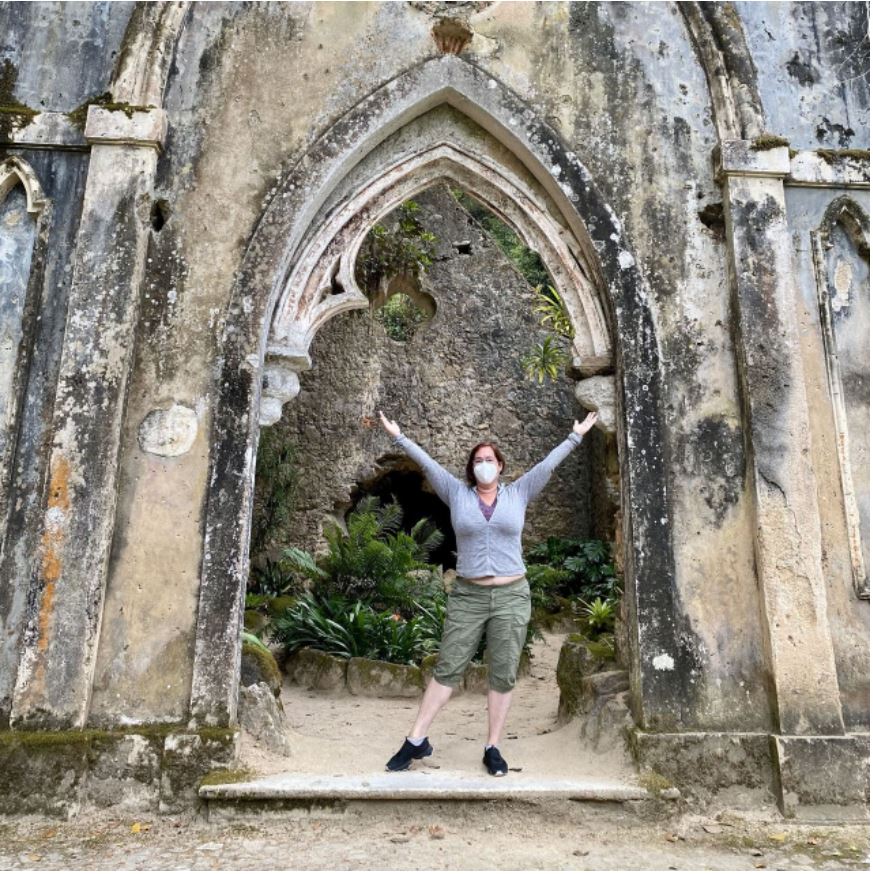 She flew to Porto, in northern Portugal, in September 2020, but in trying to manage her four heavy suitcases, she dropped one on her foot, breaking her toe. “I was an emotional basket case,” she recalls. A team of passengers put her in a taxi and the driver took her to a hospital, then to ATMs and then to a hotel, charging only about $55, after four hours. Her new landlord drove an hour and a half from Coimbra to pick her up and carried her heavy bags up four flights of stairs.

“Part of me just thought, I’m home,” she says. “Everyone I met on my very first day personified my idea of making the world a better place.”

She studied Portuguese online during lockdowns before moving to Sintra, a picturesque town with old castles, palaces and scenic beaches, just outside Lisbon. She found a two-bedroom apartment in a 250-year-old building for about $970 a month, and obtained a resident permit in September.

She’s now planning to become a Portuguese citizen, saying, “I think Portugal will always be my home base.”

Plenty of other Americans are making Portugal their home base. The number of U.S. residents in Portugal climbed by 45% last year to 6,921 and has almost tripled in the past decade. Many are drawn by a low cost of living, healthcare, a sunny climate, tax incentives and because Portugal’s resident visa requires less income than many other countries in Europe.

Americans, including many retirees, millennials and remote workers, are still one of the smallest expat groups in the country of 10 million, being outnumbered by émigrés from Brazil, the U.K., Cape Verde, India and Italy last year, according to a spokesperson for the SEF, the Portuguese Immigration and Borders Service. Many cite safety as another reason to move to Portugal, ranked as the fourth-safest country in the world last year by the Institute for Economics and Peace, an Australian think tank.

“Americans have been pouring into Portugal for the past three years or so,” says Louise Hudson, co-author of “A Worldwide Guide to Retirement Destinations.” After writing the book, Ms. Hudson and co-author Simon Hudson, her husband, formerly based in South Carolina, decided to retire in Portugal themselves. In 2014, they bought a four-bedroom villa with a pool and sea view in Praia da Luz on the Algarve coast for about $230,000. Ms. Hudson estimates their home’s value has more than doubled. 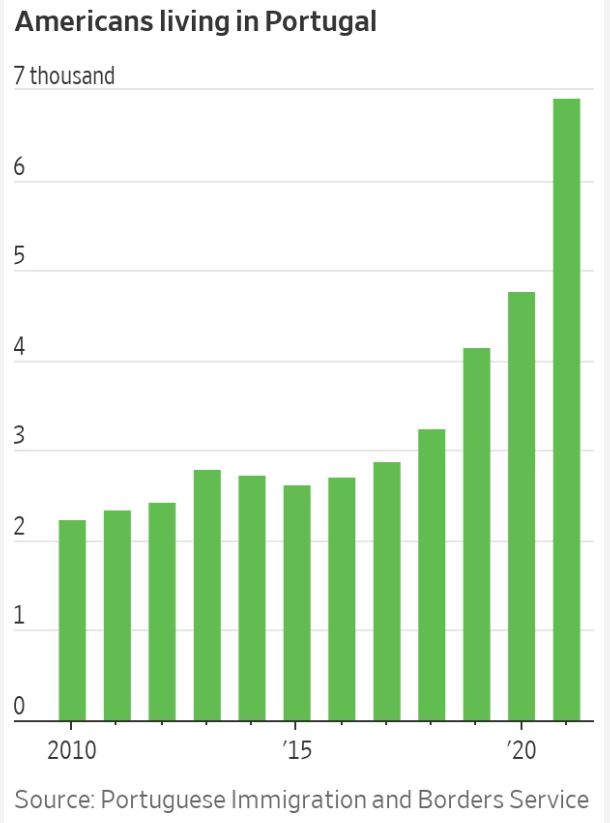 So many foreigners are buying property in Lisbon, Porto and coastal areas, that in January the Portuguese government took steps to protect locals and encourage more foreign investment inland—by cutting those popular destinations from its Portugal Golden Visa program. That visa offers foreigners a path to residency and citizenship in five years in exchange for various types of investments including property.

While the national healthcare system is available to expat residents, and essentially free, many buy private health insurance for better access to doctors. Premiums range from about $55 to $320 a month, according to Serenity-Portugal, a service helping foreigners navigate the healthcare system.

“Insurance in Portugal is much cheaper than in the U.S.,” says Michael Averbukh, an Israeli doctor who founded Serenity. He cautions that most private plans don’t cover pre-existing conditions. “You have to be aware of what you’re getting. We strongly suggest having the appropriate private health insurance.”

The cost of living in Portugal varies, but consumer prices with rent are about 40% lower than in the U.S., according to Numbeo, an online database.

Another incentive encouraging the influx of foreigners is the Non-Habitual Resident program (NHR), allowing some foreign residents to apply for low tax rates and exemptions for a 10-year period. American expat residents are still required to file U.S. tax returns, but they can’t be double-taxed under a tax treaty. Global Citizen Solutions, an international consulting firm, offers a guide to the NHR program on its website. James Cave, author of “Moving to Portugal Made Simple,” has a useful website, too.

Dealing with the government bureaucracy in Portugal can be difficult. And that has led to a growing number of visa advisers, expat coaches and consultants who provide help for a fee. Portuguese Immigration officials urge caution in hiring advisers.

“We have several investigations going on with facilitators and lawyers,” says a spokesperson for the Portuguese immigration service. “Some people say they are helping foreigners and are charging for that. Some of the time they are not. It’s a fraud.”

Indeed, Ms. Dezell says one adviser tried to charge her $2,000 in exchange for a letter showing she had accommodation as part of her visa application but she turned it down after learning she couldn’t actually live at that address. “It’s illegal. It’s a rip-off,” she says. 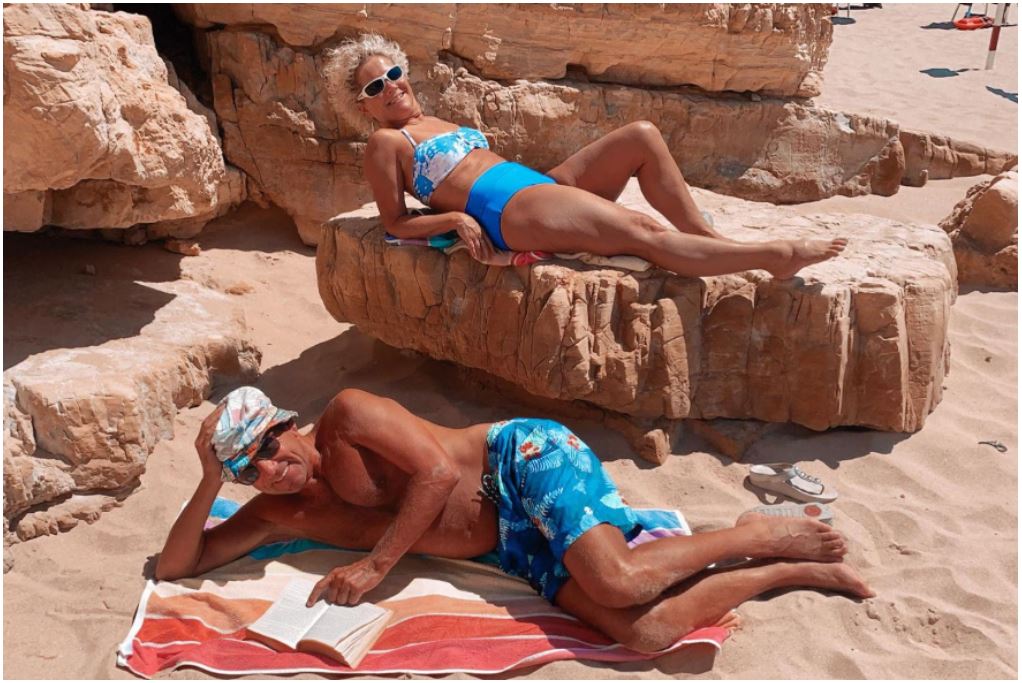 Louise and Simon Hudson, seen here lounging on Zavial Beach, wrote a book about retiring abroad, then decided to retire in Portugal.

Ms. Dezell is an administrator of Americans & FriendsPT, an expat Facebook group offering free document downloads and its more than 24,000 members share their experiences and advice.

For some, Portugal’s newfound popularity comes with a cost. “Americans are challenging the loudness scale,” says Susan Korthase, 71, founder of the Americans & Friends in Portugal Facebook group. She moved to Portugal from Milwaukee in 2010 and says she now sees the “Californiacation” of Portugal. “You hear them in restaurants,” she adds. “Americans laugh with an open mouth and they laugh out loud. Other nationalities have a quiet chuckle.”

Advisers emphasize the importance of scouting before moving. Gail Aguiar, founder of Relocate to Portugal, a consulting firm, says one male client, a retired medical technician in Florida, hired her to secure a two-year apartment lease and set up utilities—all before he set foot in Portugal. In February, she reserved him a car from the Porto airport to his hotel room in Coimbra, but after one night, he sent a terse email: “I’m not staying in Portugal. It’s just not for me,” it said.

Ellen Grace, 56, a teacher in Houston, also decided to move, sight unseen. She was finding the stress from the pandemic and the debate over masks “toxic,” when she realized she qualified for early retirement. She wanted to move to an island. She’s single and her 22-year-old son is married.

“I’m an island girl,” she says. “I wanted a slower lifestyle where I could afford to live.” The monthly costs on her townhouse had increased and she thought, “I can’t afford this and health insurance.”

She had never been to Portugal. But after researching the Azores, she sold her small townhouse for $200,000 and hired a shipping company to pack and move her possessions. She found a Portuguese lawyer through Expacity.com, a subscription website offering information and resources on immigration, and obtained a D7 visa. She had to show a Portuguese bank account, a tax identification number, proof of income and accommodation, health insurance and a background check.

She landed on São Miguel Island in the Azores in August of last year and found a small stone house with an ocean view that measured about 20 feet by 40 feet, and had a gabled attic with two bedrooms—priced at about $108,000.

“It was kind of a culture shock,” says Ms. Grace, noting there aren’t street signs nearby. Still, she loves her new life, saying, “I feel safe and I have a beautiful view in the morning.”

She now has a resident permit, but she’s still working on a social life. “I have yet to find my footing with a large group of friends,” she says. But she did go out for lunch with her Chinese calligraphy teacher and likes her Pilates class. She misses Indian and Vietnamese food. 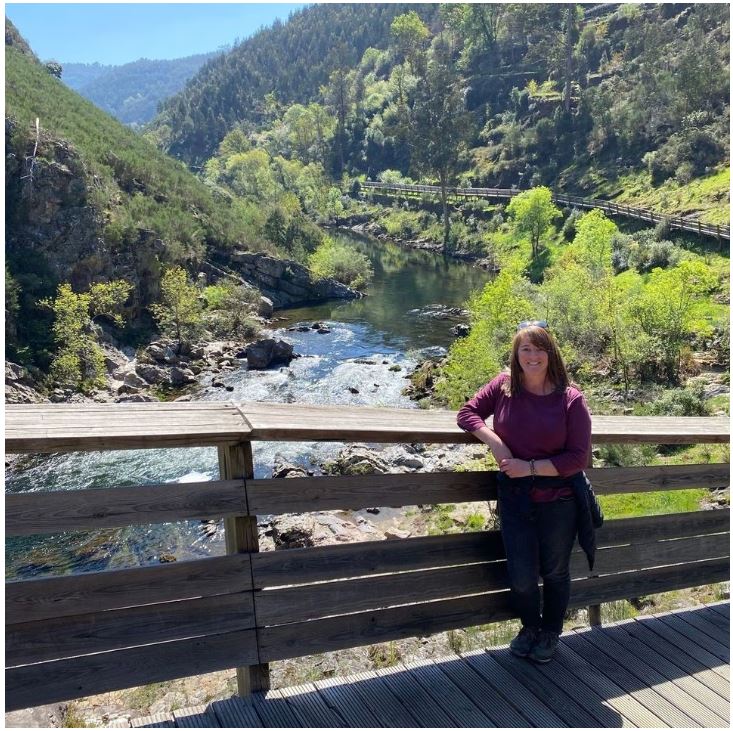 Linda Correll worked at a lot of jobs in the U.S. Now she lives in Portugal. It’s safe and people are friendly, she says.

Linda Correll, 52, grew up in the Cleveland suburbs before working as a police officer, a property manager and a real-estate agent. But, she says, “I would be miserable sitting at a desk for 20 years. I wanted to live in a different country.” Her mother passed away at age 68, right after retiring, and Ms. Correll decided she wouldn’t wait to travel.

She went to Peru, Colombia and South Korea, teaching English in public schools. She lived in Spain for a while, but getting residency in Portugal was more affordable. She moved to Porto last September after finding a small one-bedroom apartment for about $760 a month.

It wasn’t perfect. “I have been struggling,” she says. “When it rains heavily, all the water comes into my apartment.” She would also like to meet a male partner about her age but so far hasn’t been successful.

“I don’t know if I have met any men over 50 who came here by themselves,” says Ms. Correll. “You get a lot of couples, but single women are much more common for some reason.”

Still, she loves Portugal. “It’s a safe country, and the people are friendly,” she says. “The healthcare, the food, the whole vibe is the reason I’m here. I don’t have any desire to go back to the States to live.”

Article by Kathleen Hughes for The Wall Street Journal